Our intern’s recent find gave our office the idea to scrape through old drawers in every room of the house. We also checked under rugs, lifted heavy appliances, and sent Roomba under every sofa. We came up empty. Peter’s purge had been thorough. He destroyed every photo, shredded every journal, and basically robbed the world of his persona. In 1980, it would have been hard for him to imagine his work would be celebrated. It is a tragedy.

Peter moved to the San Fernando Valley in 1962. Close friends said he wanted a swimming pool and Santa Monica was too chilly. His tiny office in Santa Monica Canyon held the bulk of his paperwork, which turned out to be nothing but utility bills, blank packing slips and random matchbooks and other ephemera. He destroyed all personal correspondence. It was only through rumors and secondary sources that we learned as much as we did.

We struck gold, however, in his Van Nuys garage. There is a mounted wall shelf with a hinged door, like a wide, short cupboard. It hung open, empty except for exhaust dust from nearby motorways. Long dismissed, it caught our eye during our mad scramble for more materials. The back of the cabinet was painted cardboard. It dislodged easily, revealing a hidden treasure.

There was a typewritten note that said, “Javi, if you are reading this, it means you do love me after all. I knew it all along.”

We are still sorting through the small cache of materials, but we can’t contain our excitement. We found the apocryphal autobiography, which we will need to publish as soon as we are able. Peter annotated everything for the mysterious Javi.

The photo below explains the move from the West Side to the Valley, and it clarifies, without doubts, the truth behind his enormous endowment. It is easy to see why he was so insistent on calling it a handicap. He was remarkably fit at 66 years old when the photo was taken. Unanswered is the question as to who took the photograph. The rest speaks for itself.

We will unveil more artifacts as the weeks and months go by. Many tie in to the upcoming releases “I Was a Slave In a Roman Laundromat” and “Seamen,” both due to be released in 2018 or early 2019.

The period between 1940 when Peter left Hollywood and 1944, when he returned and became a permanent fixture in Tinseltown are clouded with mystery. Daryn, our brilliant intern from Cal State Dominguez Hills, just found a missing puzzle piece…a rare photo of Peter with his notes on the reverse.

This important photo was lodged in the railing of an old filing cabinet from Peter’s office. It sheds light on an important year in his life. It explains how he knew enough about mining to write Dark as a Dungeon. It shows a cheerful Peter on the left with a man named Jim Ivey, who apparently used to give Peter hand jobs, if we can interpret “caresses” in such a bawdy manner. The bulge in Peter’s trousers is too ambiguous to confirm the legend. Still, all he got was caresses, so it gives weight to rumors he was problematically enormous. It also casts a light on his still fragile mental state. To a fan of Peter’s fiction, this is priceless. It will take a place of honor in the archives at PS publishing.

Regulations prevent us from paying our intern in cash, so Daryn will be receiving a 50-dollar gift card to Chili’s, his favorite place to take his girlfriend on date night. 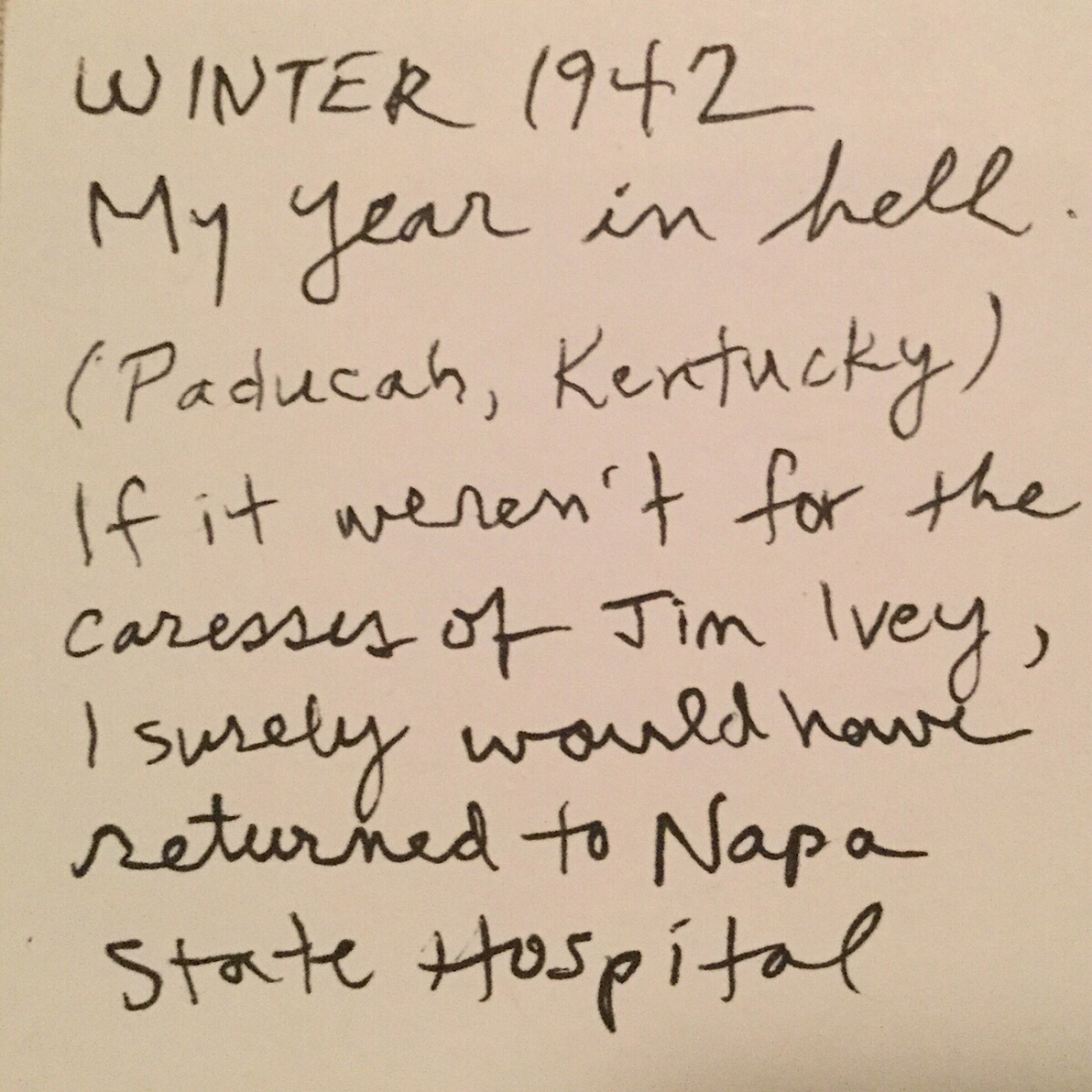 Two Peter Schutes classics came out in paperback and eBook formats in the past month. The Butt Baby is a comical tale of a man who gets pregnant through a mishap with his high school buddy Nick the Dick. It was written in 1980, after Stonewall, but before the AIDS crisis. An earlier masterpiece, Confessions of a Rodeo Clown , tells the story of Brightie Matthews, rodeo clown, and his huge lover Cody the Bull Rider…who shares a lot in common with the bulls he rides. His dangerously large appendage delights and damages the innocent clown.

Where to Buy Peter’s Books

Peter at Barnes and Noble